Blurring out-of-focus areas (bokeh) is easy using a fast fixed-focal-length (prime) lens with a low f-number. Careful focus on the desired subject blurs the foreground and background to make your chosen subject stand out. Given the ease with which a fixed-focal-length lens can produce dramatic bokeh, you can have some fun adding deliberately blurred foreground objects to the frame. Including foreground bokeh in the form of fortunes tied to a fence adds both perspective and a story to a shot of a man with his hands fervently pressed together in prayer.

Light and compact, a 50 mm lens is perfect for tourists who have to do a lot of walking. Another important bonus is that it is fast, allowing shots to be taken at wide apertures in the dim light under the eaves of a shop. Compositions that leave some space in the direction the subject is looking are better balanced than those that place their face in the center of the frame. At wide apertures, fixed-focal-length lenses can produce dramatic bokeh, but you can also try stopping aperture down to change the amount of blur according to the subject or situation. Shot at the maximum aperture of f/1.8, the pink flowers in the foreground of this scene would be so blurred that their shape could not be discerned, so I instead chose f/2.8 so that they still look like flowers.


Shooting at Maximum Aperture to Make Your Main Subject Stand Out Shooting at maximum aperture produces dramatic bokeh. Choose aperture-priority auto mode and select the lowest f-number. Focusing on the brush in the subject’s hand and blurring everything else makes the theme of the photograph clear for an impressive shot that throws the main subject into sharp relief. The subject isn’t moving very much, so choose AF‑S (single-servo autofocus) and take your time to focus on the tip of the brush.

Because fixed-focal-length lenses cannot be zoomed in or out, the photographer must change positions to change the framing. A single action can be shot in a variety of ways: by moving in for a close-up, tilting the camera down to focus on the subject’s work, or moving a slight distance away to capture their surroundings. 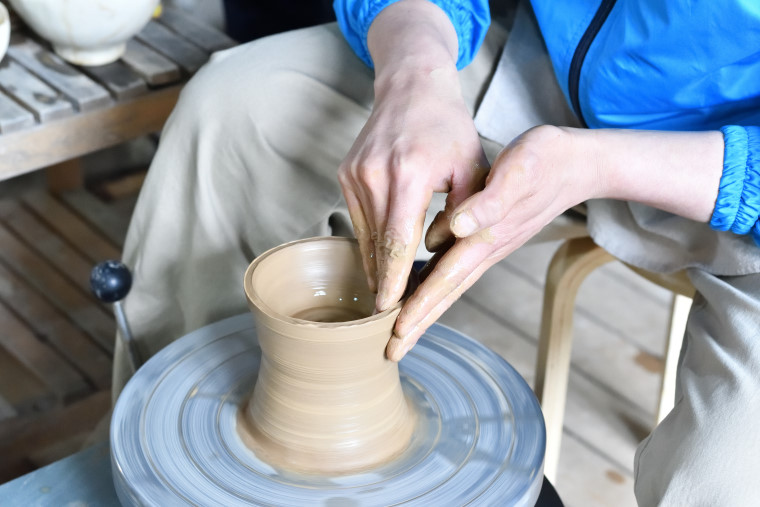 Don’t take photos of any one subject only from a standing position; by crouching down or going on tiptoe or going around your subject as far as possible in both directions, you may find wonderful angles you had never thought existed. When using a fixed-focal-length lens, be light on your feet and approach your subject from a variety of angles.


Stopping Aperture Down to Keep the Background in Focus

Using a fixed-focal-length lens doesn’t mean you’re obliged to blur the backgrounds. You can also stop aperture down to capture the background in photos that make it clear where the subjects are and what they are doing. The lens may be fast, but blur caused by camera shake is still a risk in hand-held photos taken with aperture stopped all the way down, so choose an aperture of f/8 to f/11 or so. Two of the benefits of fixed-focal-length lenses are that they keep blur caused by camera shake to a minimum and are easy to use. A fast, wide-aperture lens with a low f-number is a better choice for dark interiors than a zoom lens. Choose a wide aperture for poorly lit interiors like that shown in the sample photograph. Note, however, that because depth of field decreases as aperture increases, reducing the depth of the area that appears to be in focus, you will need to keep your eye to the viewfinder and focus carefully even when it is dark.


A fixed-focal-length lens with a standard angle of view can of course create dramatic bokeh, but it can also be stopped down to make it clear where the photo was taken. Another benefit is that the angle of view is close to that of the human eye, making it easy to gauge the distance to the subject. Fixed-focal-length lenses are also compact, so plan to bring one with you on your next trip and take lots of photos rich in character.